Welcome to STUDY ABROAD UPDATES. Study abroad updates is one of the most specialized overseas information providing platform. We are providing life stunning opportunities by connecting its students with the top-ranking educational institutions around the globe. We’re dedicated to giving you the very accurate and up-to-date information regarding the universities around the globe.
Bungalow # 3 block B Auto bhan road unit # 3 latifabad hyderabad, Sindh, Pakistan
Phone:+92-345-999-0690https://studyabroadupdates.com/Price Range:2000$
Skip to content 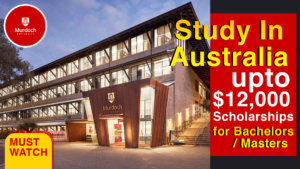 Murdoch University aspires to be a creative force for present and future generations, addressing the world’s most pressing issues through excellent translational research and teaching free thinkers who flourish in society and industry. In regards to residence and fitness, MU is likewise a top choice. Murdoch University Village is an excellent area to live if you want to be comfortable, and the Murdoch University gym is a good place to be active.